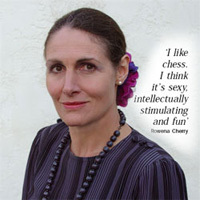 Every week for the past ten years, Rowena Cherry, Margaret L Carter, and Jacqueline Lichtenberg have posted and continue to post news, views, advice and more for writers interested in craft and science fiction. 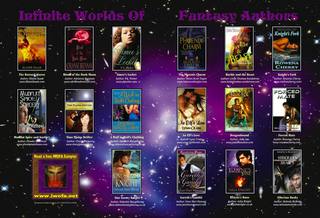 Heroines get more hero than they bargain for....

Rowena Cherry has played chess with a Grand Master and former President of the World Chess Federation (hence the chess-pun titles of her alien romances).

She has spent folly filled summers in a Spanish castle; dined on a sheikh's yacht with royalty; been serenaded (on a birthday) by a rockstar and an English nobleman; ridden in a pace car at the 1993 Indy 500; received the gold level of the Duke of Edinburgh's Award; and generally lived on the edge of the sort of life that inspires her romances about high-living alien gods.

My goal as a Romance author is to give good value. I expect to provide my readers with six to eight hours of amusement, a couple of really good laughs, a romantic frisson or two from the sensual scenes, a thoroughly satisfying Happily-Ever-After, and something to think – or talk – about when the book is finished.